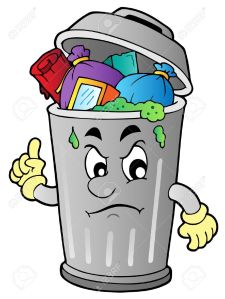 Monday is garbage day in my part of the world and what could be more mundane than garbage.  The extraordinary waste produced by extreme caregiving is rarely discussed, but as municipalities start placing stringent limits on waste disposal it is something that the general public needs to be more aware of.

My kid produces a LOT of garbage.  Our region has yet to charge for garbage bags and garbage removal so we have been able to get away with putting more garbage at the curb than the average suburban family.  Those days will be ending soon and I am not entirely sure how families like ours will be accommodated.  Families with young children will have a time-limited allowance for increased garbage during the “diaper years”.  But, what if those diaper years never end?  Or, what if you are providing end-of-life, or eldercare at home?

During my early mothering years I attempted to be environmentally friendly.  I used cloth diapers and tried to make sure my environmental footprint wasn’t ridiculously large.  But these days I am beginning to think that we might need to name a landfill after my son. During an average week my 17 year old son produces at least one full garbage bag of of diapers – adult medium sized at that. The days of cute little diapers with bunnies are well behind us.

Matthew goes through about 55-60 diapers a week.  Every week.  And will continue to do so indefinitely. That’s a lot of diapers.  He also uses a range of incontinent products like adult sized wipes.  Baby wipes just don’t cut it these days.  Throw in the fact that, weekly, we also dispose of syringes of various sizes, bags for his feeding tube, tube extensions, medicine cups, oral swabs, gauze and other assorted and sundry medical supplies (all of which are individually wrapped) and Matthew alone produces a lot of garbage.  Garbage that we cannot avoid producing by reducing, reusing, and recycling.  Many of these supplies have been contaminated with body fluids so for safety reason we cannot just toss them in the recycling bins.  Similarly, for safety reasons, we cannot re-use many of Matthew’s medical supplies for any length of time.  We do re-use syringes and feed bags for several days to try to minimize garbage.

But, in the end, lots of stuff ends up at the curb, and in a landfill, because, in essence, our home is a mini-hospital that generates a lot of biohazardous waste.

As someone interested in environmental issues I am all for reducing waste wherever possible.  But there are some situations where reducing waste is very difficult, even impossible.  Will families raising exceptional children with the exceptional garbage that goes with that task have to bear yet an additional cost – the cost of increased garbage disposal.  In many cases exceptional families are already coping with a reduced income and increased costs.   Ideally cities will provide some form of compassionate exemption for families in situations like ours.

Something to think about during municipal discussions and voting.