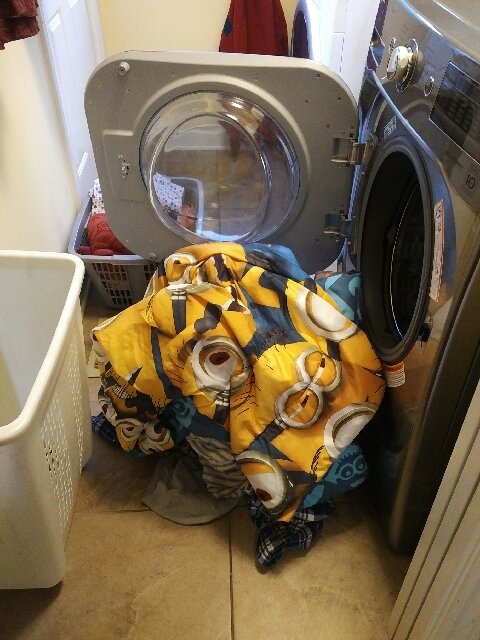 I swear I was put on this earth to do laundry.  This was the pile that Matthew’s overnight caregiver left for this morning’s load.  For the record, in that pile under the comforter are two fitted sheets, two soaker pads, two pairs of pajama pants, one t-shirt, a towel, and a pair of sox.  In the end it will likely  be two loads of laundry generated by one person during one eight-hour night shift.  And it was a pretty normal night.

When we talk about the demands that caregivers live with we often talk about things like sleep deprivation, the need to manage medical routines and appointments, the demands of transfers and physical care, and the like.  We often don’t talk about the more mundane things that add to the chronic burden that can be extreme caregiving.  For me one of those demands has been wading through an obscene amount of laundry.  I often joke, that for me, my purpose in life was to manage laundry.  Lots and lots of laundry.

Matthew is incontinent and drools constantly despite having surgery to reduce drooling (to manage his aspiration risk).  This means that it is not unusual for him to require at least one change of clothing during his day.  Prior to his fundoplication, when his severe gastroesophageal reflux  remained poorly controlled, he would barf up to fourteen times a day.  All that projectile puke generated piles of laundry – linens, towels to mop up said puke, changes of clothing, bibs, you name it.  As an aside, there is no odour I hate more than the smell of puked Peptamen.  I swear Matthew (and me by extension) marinated in the stuff for more than a decade.

With kids like Matthew laundry is not limited to daily changes of clothing. Heck, that would be easy.  Matthew’s coat, mitts, hats, and so on are often laundered weekly rather than once or twice a season. Beds linens are almost always laundered daily.  Part of my morning routine most days is to strip Matthew’s sheets and change his bedding, including soaker pads (white pads we place under his butt for  damage control).  His comforter is usually laundered once or twice a week.  We also have to launder his wheelchair coverings once or twice a month because of, well, drooling and incontinence.   In an already very busy life these mundane chores can pile up and become overwhelming for many already overburdened caregivers.  And during stretches when Matthew is ill it is these mundane chores that are often ignored.  You should see my laundry room when a crisis hits.  You can’t enter.

So on that note the dryer just beeped.  I should go fold stuff.

One thought on “Mundane moments: Laundry”