Matthew moved from what is called a wheelchair-stroller to an actual wheelchair when he was about four years old.  This transition created a problem since his wheelchair, unlike the stroller, was not compact enough to fit in the trunk of our trusty Toyota Corolla.  Panic ensued and we quickly purchased a second hand, oversized van previously used by a group home.  The van was huge, but equipped with the necessary wheelchair lift and tie-downs we would need if we wanted to go anywhere.  And since I often struggled (and struggle) with cabin fever, and if I am honest, a healthy dose of resentment about our constrained life, getting out was a priority for my sanity – and likely my son’s as well.

This hand-me-down van was also cheap, a necessity at that particular stage of our life.  Did I mention that it was also hideously ugly.  And huge.  Did I mention huge? Wow, was it BIG!  My verbal kids who were fairly young at the time promptly  named her Bessie.  I am not entirely sure why, but the name stuck.  When we retired Bessie and replaced her with a mini-van we invited all the kids in the neighbourhood over to paint her from top to bottom.  We then donated her to a local church camp where she transported canoes until the camp closed several years later.

Philosopher Merleau-Ponty in Phenomenology of Perception (if you have insomnia you should sprint your nearest bookstore and buy the book, I assure you, problem solved!) discusses how vital objects can become part of one’s body.  He suggests that a white cane for someone who is visually impaired stops being an object for the user and becomes a necessary and functional part of the body – as sensitive and as necessary as fingertips for some of us.  I bring insomnia-cure Merleau-Ponty into the conversation because he beautifully captures how I felt as Bessie’s driver.  Driving the behemoth I had to accommodate this much larger bulk while moving around the community. Her size became part of me when driving.  Bessie became a significant part of how I perceived space and movement when behind the wheel.  When we finally moved to a wheelchair accessible mini-van Bessie had become sufficiently assimilated into my sense of space that it took me ages to stop taking wide turns and parking in the remote spots of the lot.

Let me tell you I celebrated when we purchased a mini-van.  I had a love-hate relationship with Bessie.  She got us where we needed to go, but WOW was she was clunky and ugly.

Last year Matthew got a funky new wheelchair.  It is a dynamic chair and is only one of two in Canada.  Basically when Matthew moves the chair moves with him. It is way cool!  But one BIG problem with the chair is that Matthew sits about 6″ higher than a standard wheelchair because of the moving parts.  Throw in the fact that he is growing like a weed and has a father who is about 6’3″ and his head was grazing the top of our mini-van.  I had to duck his head when loading him.  I was becoming worried that I was one rushed morning away from concussing the kid. Or worse.

So last fall our mini-van days ended for good.  <SIGH>  We purchased another oversized van with a power lift.  This one isn’t as ugly as the original Bessie but it IS about as large. My teens and I spent days chatting about an appropriate name.  Was she Bessie 2?  For a while we called her Bluebird.  But in the end “the Beast” is the name that stuck.

These days I am back to navigating parking lots with extreme care and driving with the spatial sense of a long-haul trucker.  The upside is that I will likely never be homeless since I think the Beast actually has MORE square footage than those new tiny homes that are very popular! 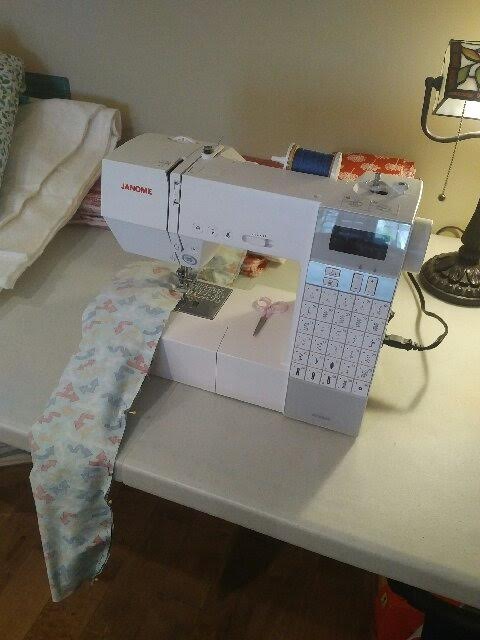 I started the above project in February.  One night while I was sewing Matthew decided to start screaming and not stop.  And then my kid proceeded to spend most of March in and out of the ICU at a hospital over an hour away.  And then I spent April following up with medical professionals and trying to get  back on track with life.  This sewing project has remained exactly as you see it for the better part of three months.

The project is a car themed pillowcase for a very young friend of mine.  I had hoped to have it completed in fairly short order.  For the record, I can sew a pillowcase in about ten minutes.   At the rate I am going the project might be finished in time for Christmas.  Or his university graduation.  My days seem sufficiently crazy right now that sitting down to sew seems impossible.  Perhaps during the summer months??

A few weeks ago I wrote about the fact that I would often put my coffee down, get caught up in caregiving, and not return to it until it was stone cold.  I am detecting a theme here.

Life with a medically fragile child is unpredictable and interruptions to life are common.  When the you know what hits the fan it isn’t as if one can say, “Hey Matthew, can you stop de-satting (when oxygen saturation levels drop dangerously) until I am done this pillowcase”.

My son’s care is pretty demanding on a day-to-day basis and his needs generally keep me hopping.  Medically fragile children, by definition, are unstable and that instability can translate into some pretty scary stuff.  Crises can hit at any time.  And with kids like Matthew it can be hard to determine when you might be able to return to what you were doing before the crisis. Frankly, I am often amazed I am able to get anything substantial done at all.

If I have learned anything along this journey of extreme caregiving it is that it is good to have plans.  It is good to keep living your life.  But hang on to those plans loosely and be prepared to renegotiate their terms regularly.  And sometimes you toss those plans out the window and make new plans.

It is Friday evening and Matthew has gone to the movies.  Perhaps I will go finish a pillowcase.

Call me crazy, but I like my coffee hot.

A while ago I noticed that coffee seemed to taste better while consumed in my car.  It was usually take-out coffee so I went through this whole analysis of whether it was the coffee, the cardboard cup, or what, that made the joe taste better.  And then it dawned on me.  The coffee was HOT.  When drinking coffee in the car I couldn’t get distracted by life.  I had nothing else to do but to drink the darn coffee as I drove.

I love weekends.  On weekends I have a nurse start at 7am so I am not responsible for Matthew’s morning care.  On weekends I get to drink my coffee piping hot.  I usually have a second cup and drink IT piping hot.  Hot coffee might well be my bliss.  What can I say.  I am easy to please!

Because during the week my life usually looks like the picture below. 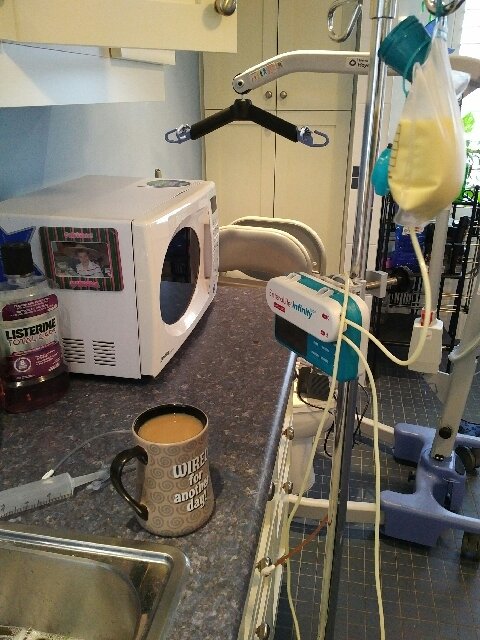 The cup of coffee you will note is full.  It is also stone cold.

Every morning I make a pot of coffee with the plan that I will drink a cup while it is still hot.  What can I say, I live in a state of perpetual hope.  Some might call it delusional I suppose.  Every morning I take that cup into Matthew’s room to start his morning care.  I assume I will drink sips of the hot coffee between priming his feeding tube, drawing up meds, maybe even while doing his nebulizer treatment.  And every morning I get caught up in the busyness of morning care and the darn coffee becomes cold.  Another opportunity lost.

In two more days it will be Saturday and I will enjoy not one, but TWO, steaming hot cups of coffee.  You see.  Perpetual hope!

A few years ago I was a doctoral student completing coursework. Since I was commuting almost two hours, one-way, to Toronto I tried to concentrate as many classes as possible in a day to minimize the number of trips I would have to make each week.  During this time there was a stretch where I was dog sick with whatever virus was making the rounds. But I had two seminar style tutorials that I didn’t want to miss so I dragged myself into U of T.  Falling behind was the kiss of death because I knew I would never find the time to get caught up.

On one particular day I must have looked and sounded pretty awful because when I walked into the small group room the professor stopped whatever he was doing and asked me why I had even bothered to get out of bed. I mentioned that I had an additional class that day and I didn’t want to miss any content. I didn’t bother explaining the falling behind and kiss-of-death stuff.

Now here’s where it gets funny in my opinion.

The prof looked up from his book and said, “ah, you must be here for good sex”. I swear that is, word for word, what he said. Now I know my brain was addled with virus and drugs, but for the life of me I couldn’t figure out what the heck he meant by that. I am sure I sat there dumbfounded for a few beats.  I had already taken several classes with this professor so I knew he was scrupulously professional and meant nothing inappropriate. But what on earth was he talking about?????

As an aside, I shared this blog post with a few friends before posting and they all had MUCH better responses for that question than I would have ever pulled out of my hat.

It took me a several seconds to figure out that he assumed, that in addition to his class, I had also come in to U of T to attend the class called “Good Sex: Advanced Studies in Sexual Ethics”, routinely abbreviated to “Good Sex”.

“Ah, no”, I said. “Not Good Sex, but Spirituality and Suffering”.

At that moment the unspoken thought in my head was “Damn, if that isn’t an apt comment some days”.   I am sure many extreme caregivers can relate.